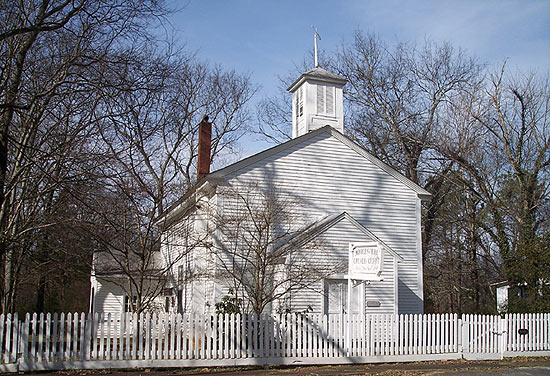 The venerable white clapboard Church of Christ on Market Street was originally built in 1854 as the Disciples of Christ meeting house. The church site was purchased from James Clements of Madison County in 1851. The entry vestibule and the rear wing were added in or around 1937. The uneven lap of the clapboards seems unusual to the modern eye, but is common to buildings of this period. The architecture of the church is in the Greek Revival style although the detailing is reminiscent of the earlier Federal period. The reason for this discrepancy may have been that the more elaborate Greek Revival detailing was a bit too expensive for the modest congregation. Another theory is that those who were in charge of the building did not want it to appear “too modern.”

General James A. Garfield, who would later become the twentieth President of the United States, preached here in 1863 while encamped at Bibb’s Spring with the 42nd Regiment of the Ohio Volunteers. The Bible he is said to have used was kept at the church until recently. This historic book was eventually removed for preservation and restoration.